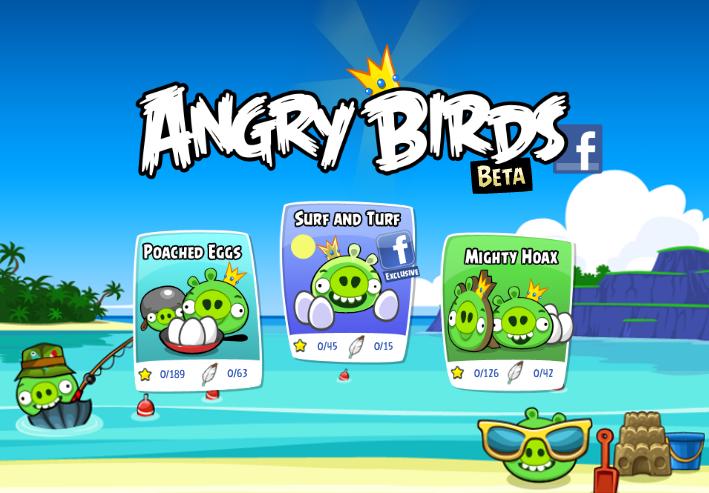 New levels and new powers for the angry birds in this Facebook version of the game are the main attraction in this season. More levels and powers yet to come in the next updates. Like the fan page of Angry birds on Facebook to get the updates and news. There are daily rewards for you, when you play this game regularly. If you are lucky enough and played this game on this Valentines day, you might have received your valentines Gift. This gift may be “Power-ups”. I got 14 Power-ups.

This Facebook version of the game is in BETA and there are three different main levels including the the exclusive Facebook special level i.e.  “Surf and Turf”. The others are “Poached Eggs” and “Mighty Hoax”. There are 360 levels in totals for Facebook players where the Poached eggs section has 189, Surf and Turf has 45 and Mighty Hoax has 126 different levels. The score will be displayed on the board and you can invite your Facebook friends to the game. You can view their scores and levels too. Just like other popular Facebook games this game has also the options to play in Full screen mode and collect your gifts from the Inbox. The Avatar section is not activated yet and has a coming soon notice displayed. So you can also choose and make your own avatar in the coming days.

This site uses Akismet to reduce spam. Learn how your comment data is processed.